Top Places in Croatia to Visit for Culture and Heritage

Croatia is renowned for its striking natural beauty, but it’s also very rich when it comes to culture and heritage. In fact, despite being a small country, there are 10 UNESCO World Heritage Sites visitors can explore. To experience some of the best of its unique cultural heritage, be sure to put these destinations on your itinerary – all can be explored by embarking on one of the many unforgettable Croatia small ship cruises.

Split is home to one of the world’s most well-preserved monuments of Roman architecture, Diocletian’s Palace. However, it’s not the kind of palace you might envision, rather a maze-like complex of winding narrow streets and alleyways that covers nearly half the fortified part of the Old City. It’s the place that gave birth to Split, with Roman Emperor Diocletian deciding to call this beautiful area along the Dalmatian coast his retirement home. Constructed between 295 and 305 AD, many of its original features are still intact today. It’s home to the oldest cathedral on the planet, the Cathedral of St. Domnius, the most notable landmark cruisers see as the ship pulls into the harbor, and once served as the emperor’s mausoleum. Looking out to the historic center, you’ll see its bell tower which can be climbed to enjoy a jaw-dropping panoramic view of the ancient city, the port and out to the glistening expanse of the Adriatic.

Most Croatian cruises that feature Split on their itineraries will include a tour of the centuries-old streets that are like stepping back through time. In addition to St. Domnius, you’ll be able to marvel at one of the finest examples of Renaissance and Gothic architecture in the Cathedral of St. Lawrence and witness many influences by the Greeks, Romans and Venetians throughout the magnificent monuments and buildings.

Check out our Deluxe Cruise from Split here > 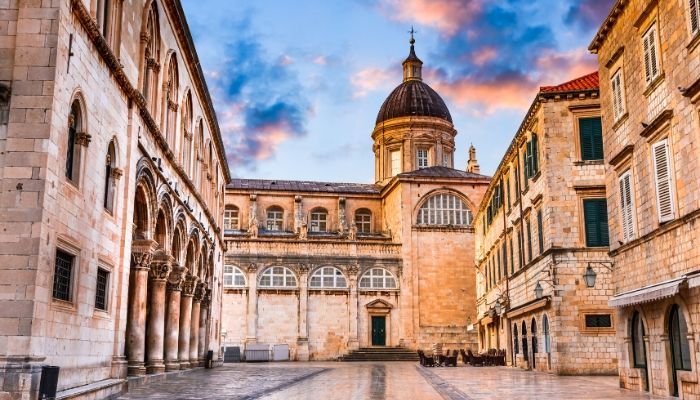 Of course, Dubrovnik is the city that many people are familiar with thanks in part to the hit show “Game of Thrones” – although Split is also home to a number of its filming sites. The historic core of the so-called “Pearl of the Adriatic” (nicknamed by poet Lord Byron) was listed as a UNESCO Heritage Site in 1979. There are many cruises from Dubrovnik that will allow you to explore the marble streets on a guided tour, gazing up at the impressive medieval architecture while discovering the history behind them. Some of the highlights enclosed within the ancient stone defensive walls include one of Europe’s oldest pharmacies, founded in 1317, Dubrovnik Cathedral and Rector’s Palace. There are opportunities to walk atop the city walls to view it all from above, along with nearby islands and the endless blue of the Adriatic.

The best Croatia cruises nearly all include a visit to Hvar Island, one of the country’s most popular isles, attracting many international jetsetters and plenty of celebrities too, including Neil Patrick Harris who enjoyed time here during the summer of 2019. Some, like the Croatia & Montenegro Heritage Tour, will bring you to its fairytale-like town of Stari Grad, one of Europe’s oldest towns, founded in 400 BC. A UNESCO World Heritage Site, it’s beautifully well-preserved, with alluring cobbled streets lined with charming stone homes and landmarks like Tvrdalj Castle, the summer residence of renowned poet and local noble Petar Hektorovic who fortified it to provide shelter to local citizens while under attack from the Ottoman Turks. Note the long, closed façade on the seaward side. You’ll see living quarters, servant quarters and wells arranged around a saltwater pool in the interior courtyard, and behind the main buildings is a walled garden where the poet himself once cultivated medicinal plants and herbs. During the summer, Stari Grad hosts many cultural events too, including concerts and recitals.

Some Croatia cruise tours begin in Venice, Italy and include the fishing village of Rovinj as one of the first stops. This former Venetian vassal state was once an important seaport, and a town of sailors and fishermen. Its traditional fishing boats, called batanas, were recently added to the UNESCO Cultural Heritage list with the Batana Eco-Museum created to raise public awareness about them. It features a permanent exhibition that displays information about how batanas are built, how fishing equipment is made and much more, in order to highlight the role that the boats have played in traditional vessel communities while helping to safeguard maritime heritage.

Rovinj is also a popular destination for summer getaways, allowing visitors to wander through uncrowded cobblestone streets with unique shops, art galleries, bars and eateries. It also serves as an ideal base for discovering the up-and-coming Tuscany-like region of the Istrian Peninsula, home to many impressive cultural heritage sites like the picturesque hilltop town of Motovun, famous for its truffles. The medieval fortified village was developed from a prehistoric hill fort and has wonderfully preserved its medieval characteristics.

Explore the best of the country’s cultural and heritage by booking one of our fascinating Croatian cruises as mentioned above, like the Venice & Croatia Private Tour, or call us at +1 (844) 879 7838 and we’ll help you create the trip of your dreams.