The Most Colorful Place In Every Country Of The World

Theory has shown that certain colors trigger particular emotional responses and that being around colors can be an instant mood booster.

So, to reap the rewards, some people opt for ‘dopamine dressing’ where they wear brightly colored clothing to boost their wellbeing… but others take it one step further.

‘Dopamine travel’. A concept that is all about finding a destination bursting with color and full of vibrant sights, smells and sounds, and visiting to enhance our happy hormones.At Unforgettable Croatia, we always encourage travellers to visit some of the country’s most vivid places, including Plitvice Lakes National Park and the colorful waterfronts of Vis and Rovinj. But, we wondered where in Croatia best to visit for that coveted hit of dopamine.

Well, we’ve actually managed to find out – and not just where in Croatia, but for every country around the world. Read on below to find out where the best places are around the globe for a bit of dopamine travel! 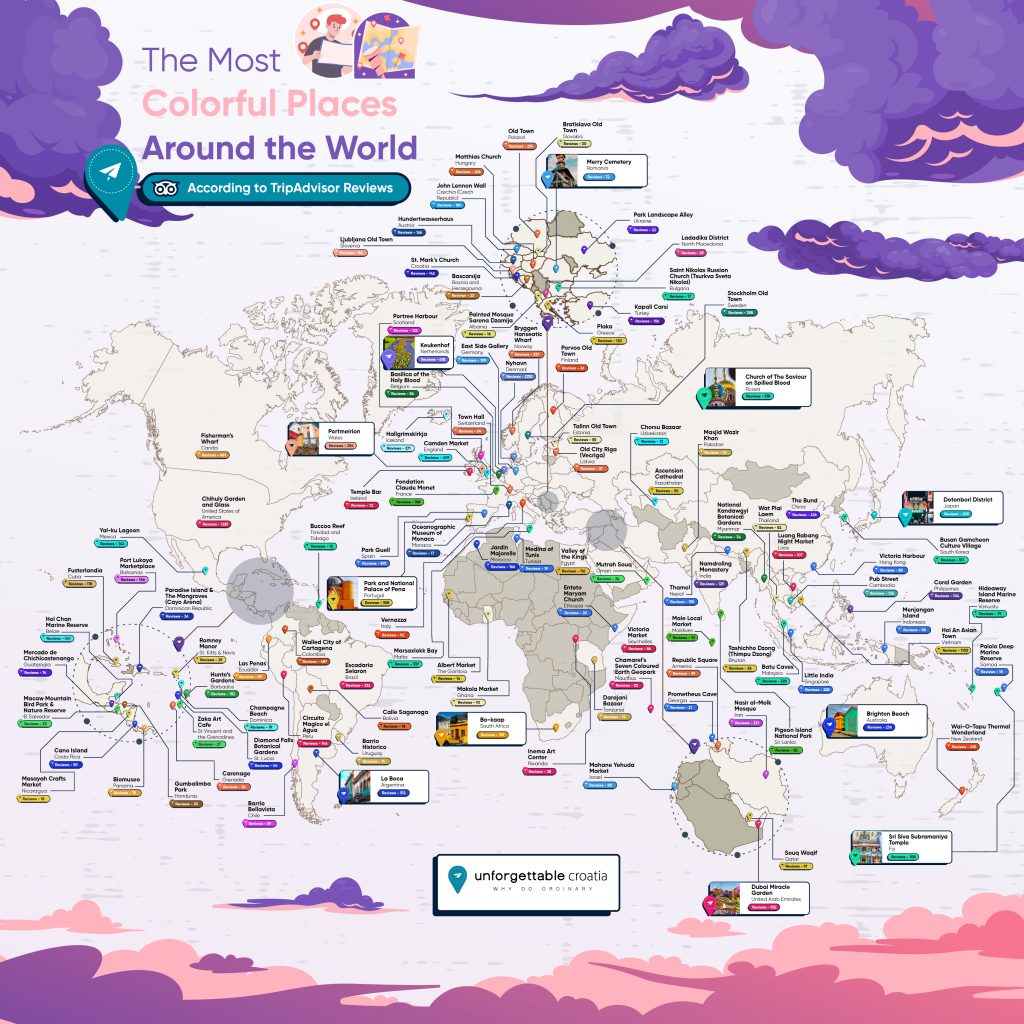 It is St Mark’s Church that actually takes the top spot in Croatia with 142 of its reviews mentioning the word ‘colorful’.

This isn’t massively surprising though considering that the building is famous for its roof of blue, red and white tiles that display the medieval coat of arms of Croatia. The vibrant church is actually the oldest in Zagreb, the country’s capital, being built as early as the thirteenth century.

And what about the most colorful places in the world? Well, we can reveal the top ten below!

The Ten Most Colorful Places Around The World 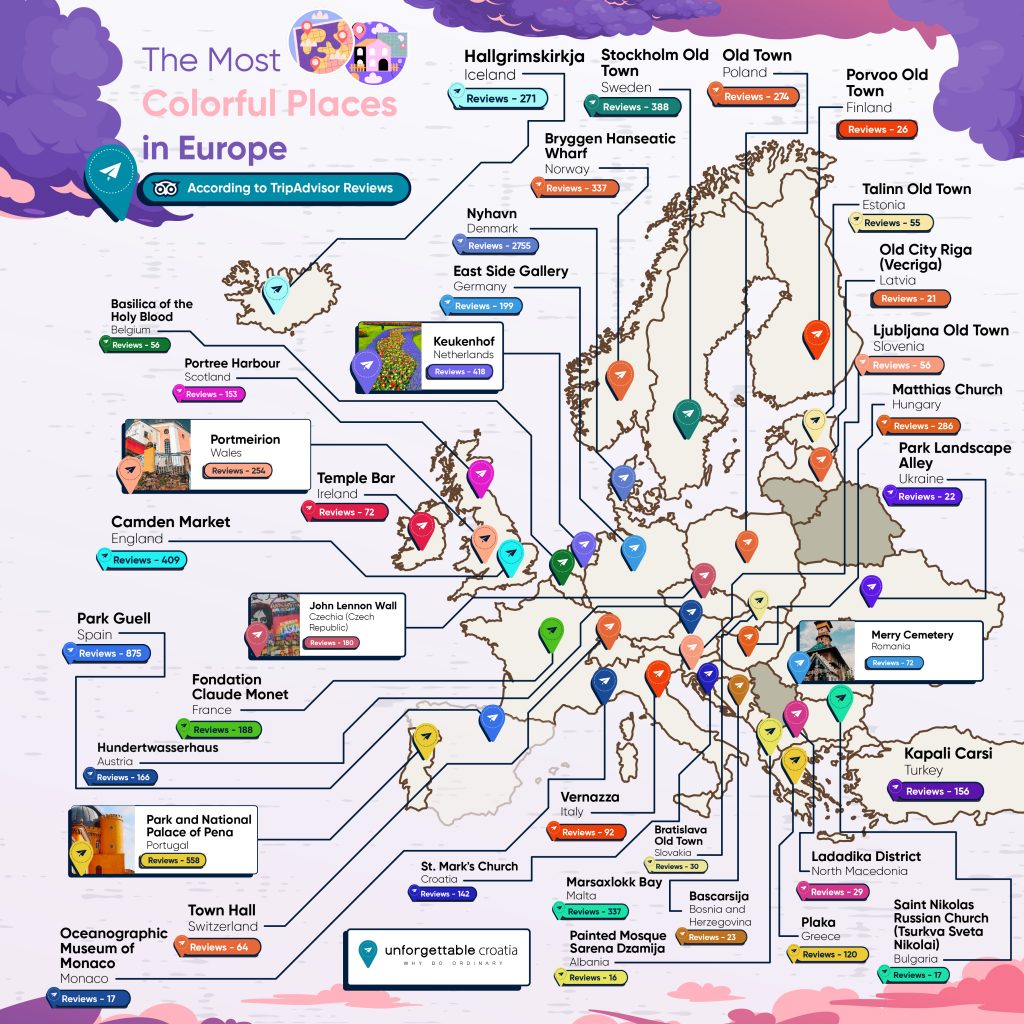 By an absolute landslide, it is one of Denmark’s most iconic sights that takes the title of the most colorful place in the world, as well as Europe!

With a staggering 2755 reviews mentioning its vibrancy, Nyhavn is a narrow waterway with brightly colored townhouses lining either side. A good spot for a hit of dopamine, for sure. You can also release some endorphins by relaxing and drinking a coffee in the multiple cafes along the waterside.

On the more unusual side is Romania’s most colorful place… which is a graveyard in the Maramureş county. With 72 ‘colored’ reviews, The Merry Cemetery is famous for its brightly decorated tombstones that are adorned with darkly humorous messages.

Whilst typical gravestones display generalized niceties like ‘Rest in Peace’, the Merry Cemetery instead details the life stories and final moments of the bodies they mark, highlighting that death is a moment of anticipation for a better life. 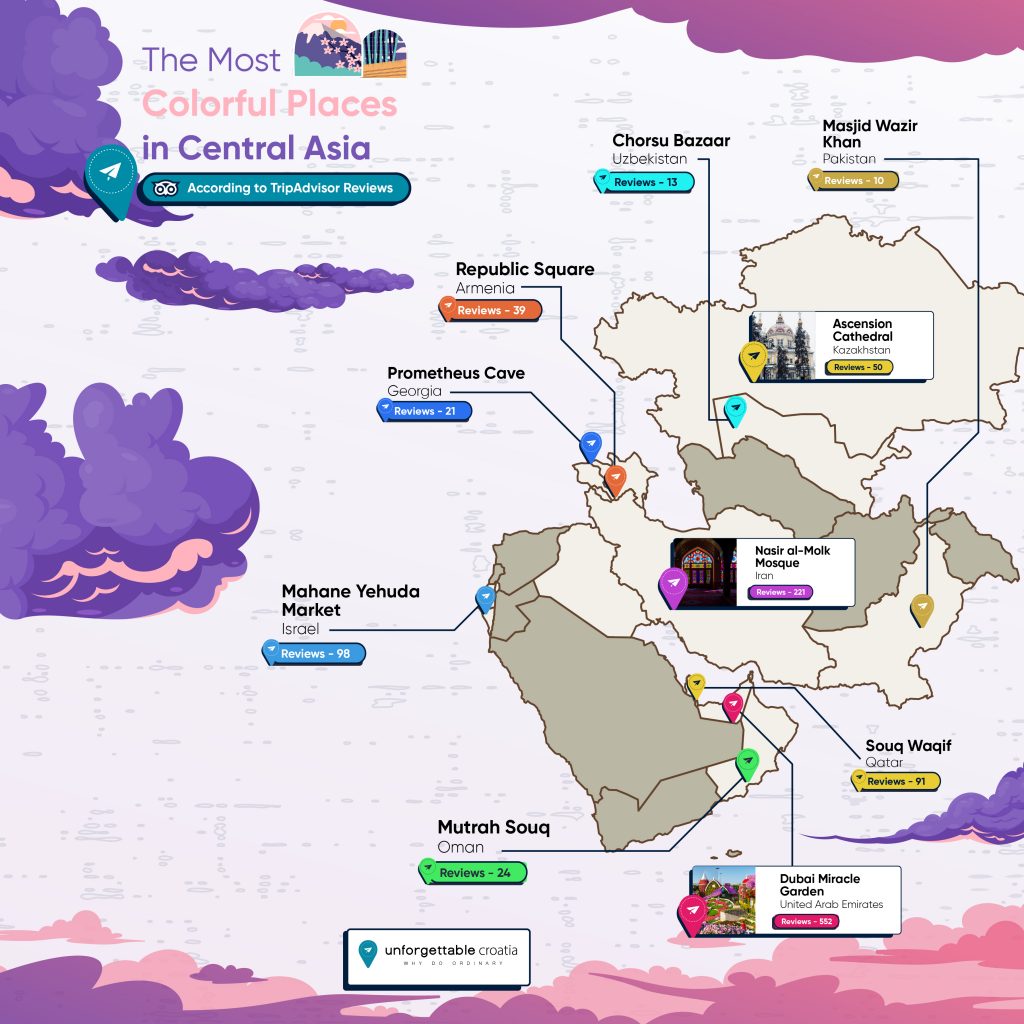 Keeping with the theme of religious colorful places, one of Central Asia’s most vivid places is Nasir Al Molk Mosque in Iran with 221 reviews. The building boasts extensive colored glass in its facade so, once the sunlight hits the windows, the entire building is flooded by a vibrant rainbow of colors – and with it, a dopamine hit for everyone inside!

Taking the top spot as the most colorful place in Central Asia though is Dubai’s Miracle Garden, the world’s largest natural flower garden and home to 150 million flowers of different varieties. With over 500 reviews commenting on the colors, the garden aims to bring colors to life, literally, and is a unique display of vibrancy in a country known for its arid desert. 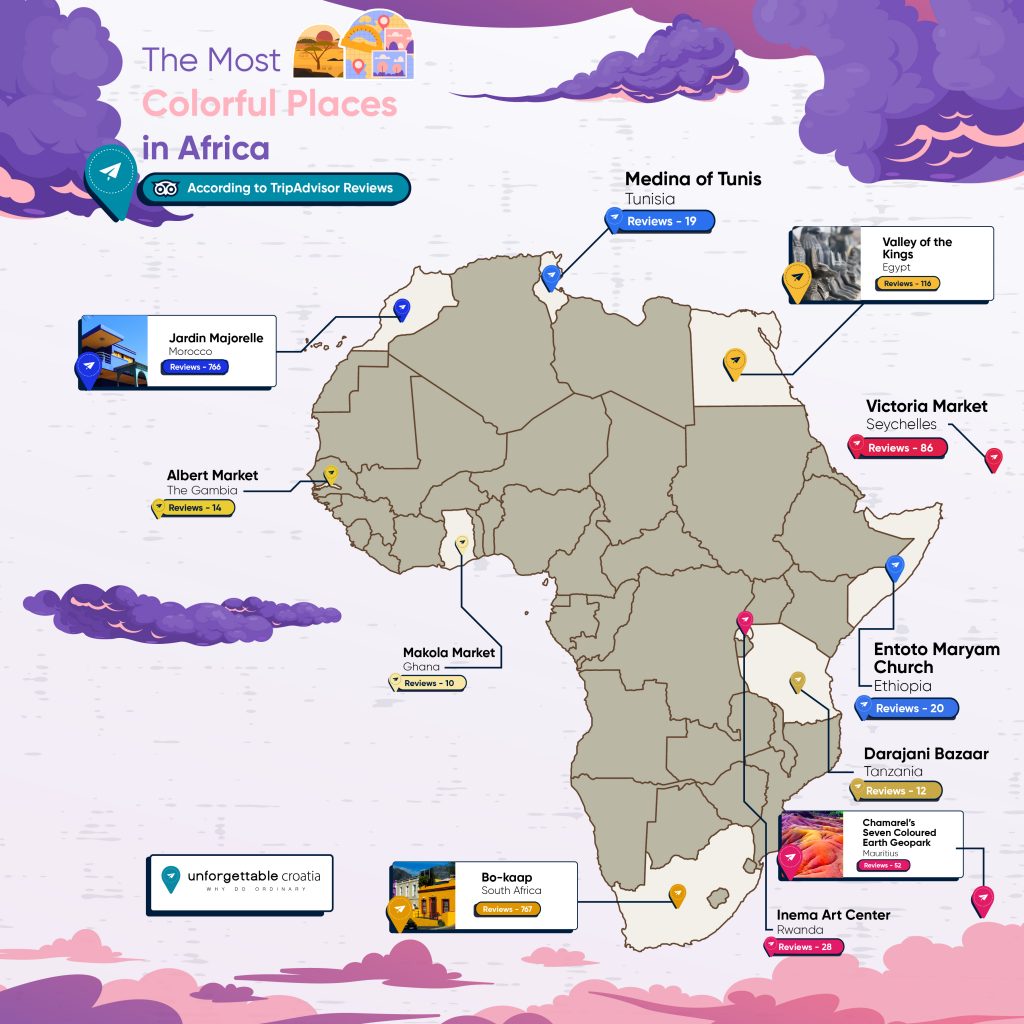 Continuing with vibrancy in the desert, one of the most colorful places in Africa is Morocco’s much-loved museum dedicated to high-end fashion. 766 reviews mention how colorful Jardin Majorelle is as a result of its striking cobalt blue facade so the museum, which is dedicated entirely to the work of Yves Saint Laurent, is an ideal place for a hit of dopamine it seems.

Beating the museum by 1(!) review is Bo-kaap in South Africa, a neighborhood where is it hard not to be charmed by the lime green, canary yellow and bubble-gum pink houses lining the cobbled streets.

The colors here actually signify freedom, with a rule once denoting that all houses had to be painted white. Once lifted, the people who lived here were able to purchase their houses and decided to paint them in vibrant colors as a statement. 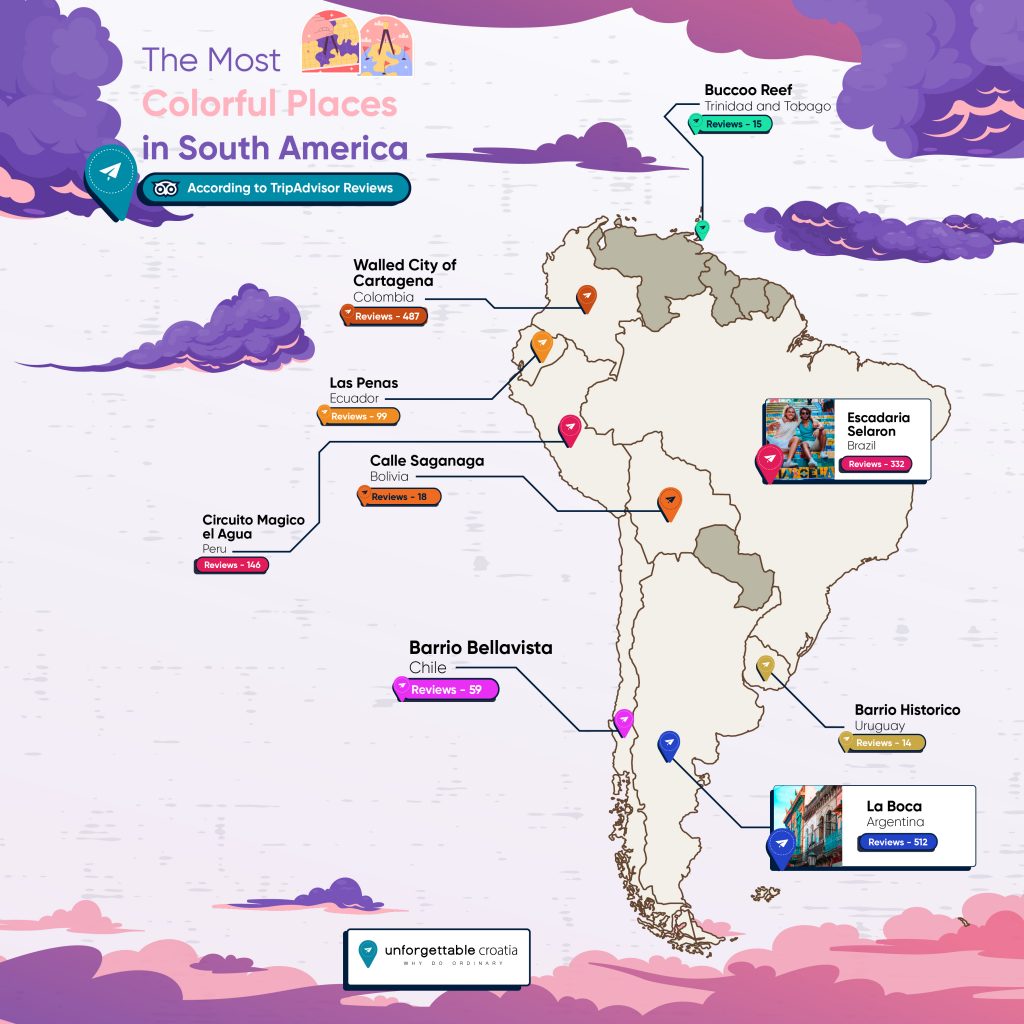 Another place where colors tell the story of its history is the Walled City of Cartagena, which took the top spot for the most colourful place in Colombia – and second place in South America.

Inside the walls, the colonial buildings are painted in striking blues, yellows, oranges and greens, and their wooden balconies are covered in drooping flowers. It’s hard not to feel a rush of dopamine as you wander around the Caribbean town amongst the vibrant pink Bougainvillea.

La Boca is another neighborhood adorned with colour, taking the top spot as the most colorful in Argentina. One of the most photographed and visited areas of Buenos Aires, patchwork houses are a colorful result of the dock workers building their houses with leftover ship-building materials and using leftover paint to decorate the exteriors. 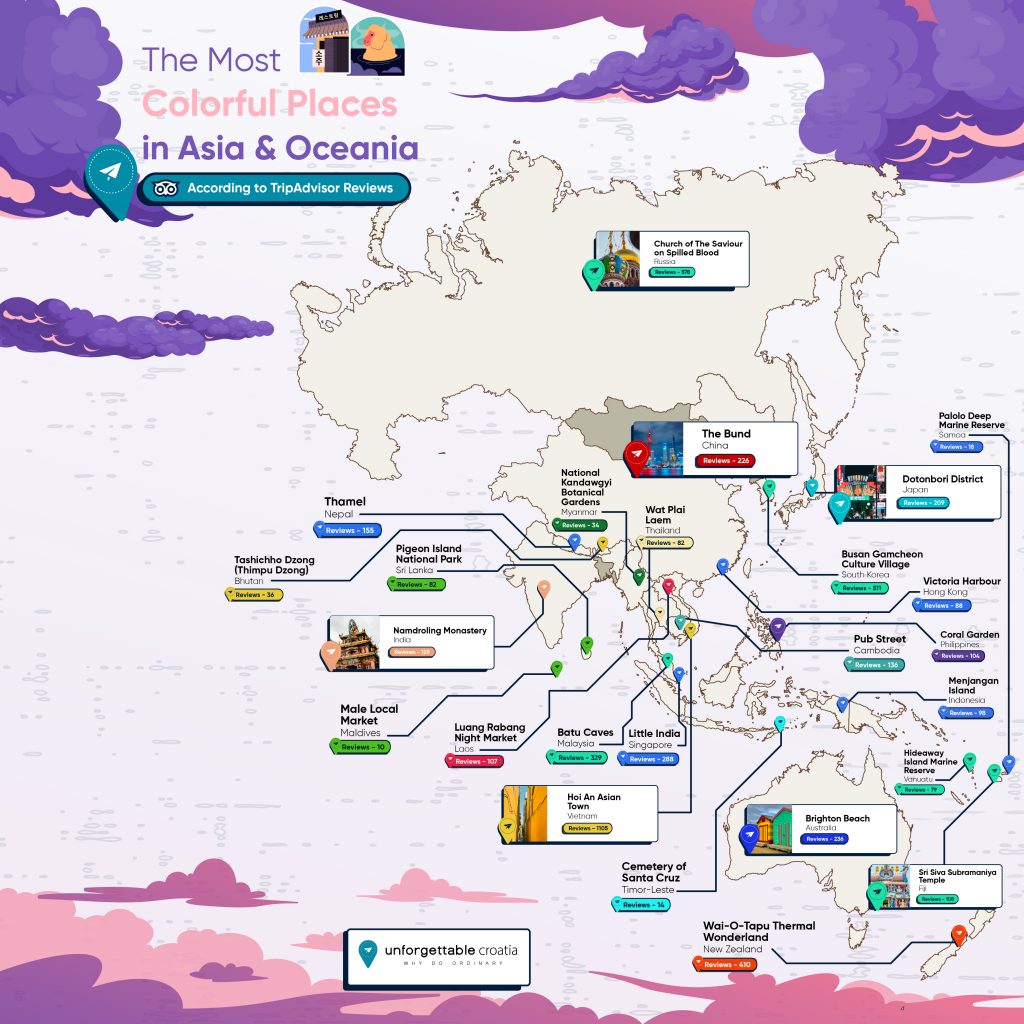 Also securing itself the top spot in Asia and a spot in the 10 most colorful places in the world is Hoi An Old Town in Vietnam, with an impressive 1,105 reviews.

Situated on the coast between Hanoi and Ho Chi Minh City, the small town is renowned for its mix of Japanese, Chinese and French influences and streets lit with lanterns of all shapes, sizes and, more importantly, colors. The World Heritage Site is a sight to behold and wandering along the pretty streets is a surefire way to increase your dopamine levels.

Another super colorful destination in Asia is the Church of the Savior on Spilled Blood in St Petersburg, Russia. The church was built at the end of the nineteenth century in a classical Russian style decorated with colorful domes and glazed tiles.

The iconic building, which has 578 reviews commenting on its colors, is arguably one of the most famous sights in the country. 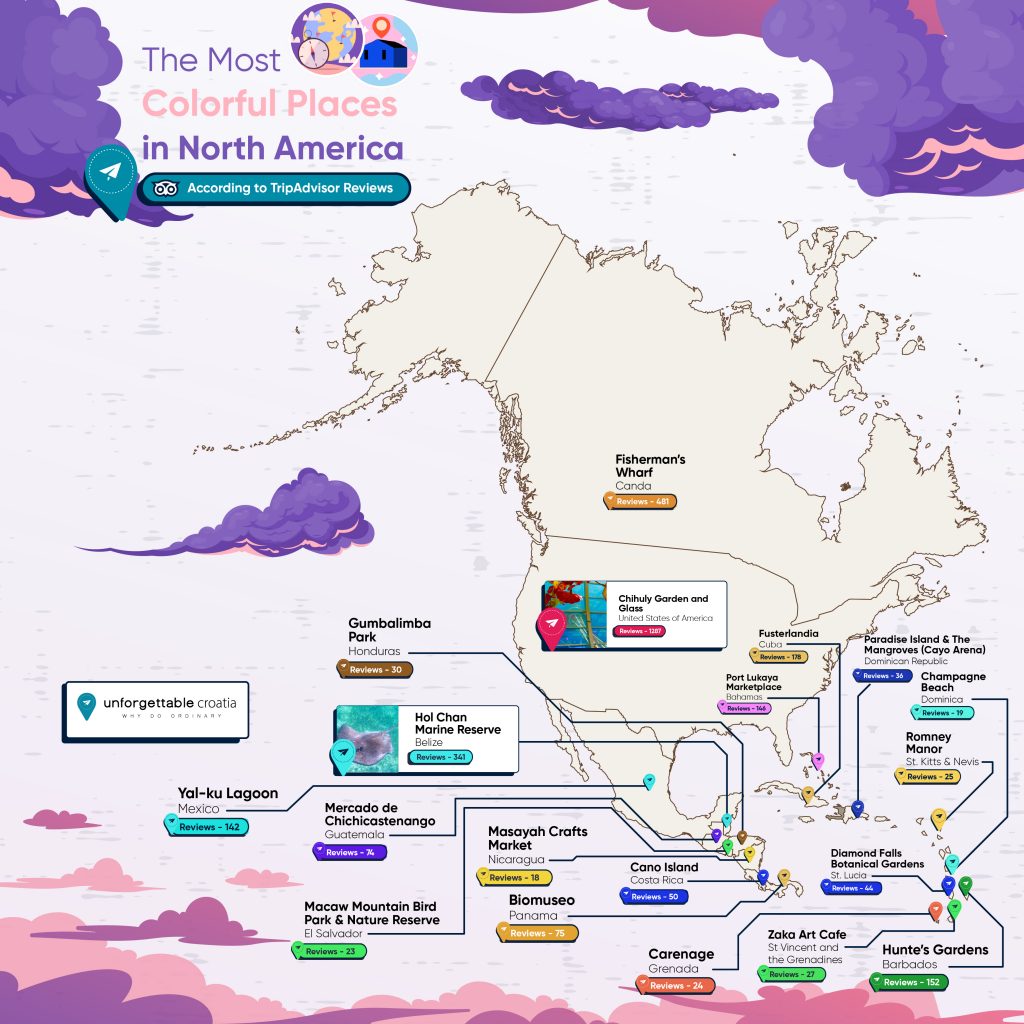 And finally, and by no means least, North America’s most colourful places. Taking the top spot (and second overall) is Chihuly Garden and Glass in the United States of America. The Seattle exhibition takes the phrase immersed in art quite literally and is both an indoor and outdoor display of colorful glass.

As you wander through the exhibition, which has over 2,000 reviews commenting on its colorfulness, you can’t help but feel inspired – and a rush of dopamine is guaranteed as you marvel at the vivid artwork!

Another particularly colourful place in North America is Vancouver Island’s Fisherman’s Wharf. Being a working harbor, the Canadian tourist attraction is a hub of activity and is particularly renowned for its brightly-painted floating homes and cottage rentals, which earned it 481 reviews and the title of second most colorful place in North America.

We used Tripadvisor’s search function by keywords and location on the “Things to do” tab. We used the word ‘colorful’ (spelling appropriate) and searched this in every country of the world.

Countries, where data was not available, were omitted from the study.