7 nightsPrice From: $1,595
Call NowRequest a Quote
Enjoy the wonders of the stunning Southern Dalmatian Coast as you set sail on our deluxe Dubrovnik to Split cruise. Watch the islands go by from the comfort of your cabin balcony or sun deck. Discover magnificent UNESCO listed Old Towns including Dubrovnik, Split, Korcula and Trogir. Enjoy fresh oyster and wine tasting experiences along with a visit to the enchanting Blue Cave and stunning Mljet National Park. 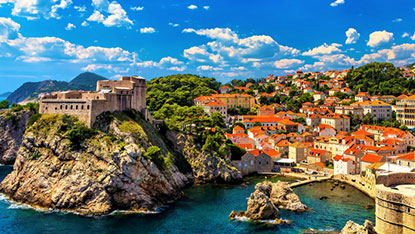 Cruising from the ‘Pearl of the Adriatic,’ Dubrovnik, sail the spectacular Dalmatian coast, soaking up the scenery and the flavors while experiencing some of the country’s most majestic cities and picturesque islands. Just some of what’s on the agenda includes guided walking tours of Dubrovnik and its ancient City Walls, the enticing maze of streets in Split’s Diocletian’s Palace, fortified Ston and the charming Old Town of densely forested Korcula.

A tour through pretty Trogir and glitzy Hvar are on the agenda too – climb to the top of Hvar’s fortress to gaze out at one of the region’s most stunning vistas. 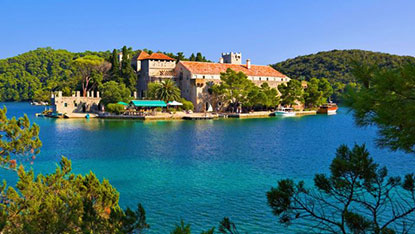 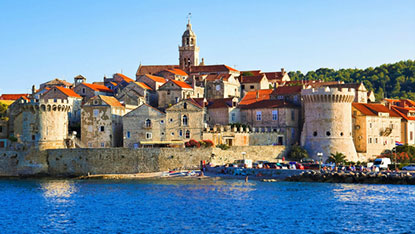 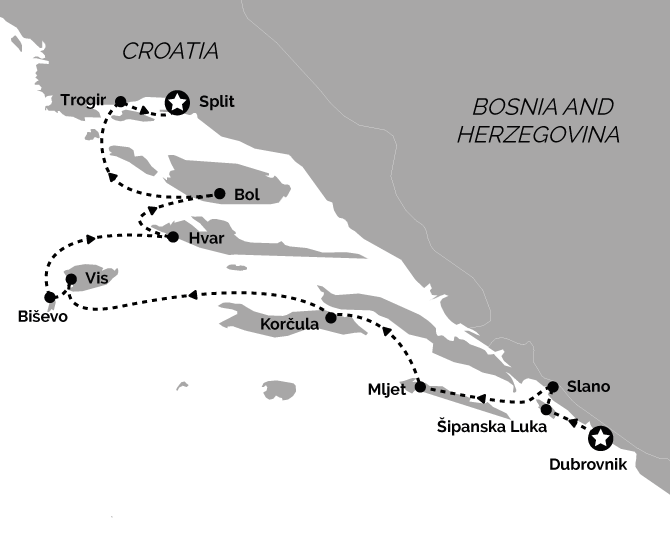 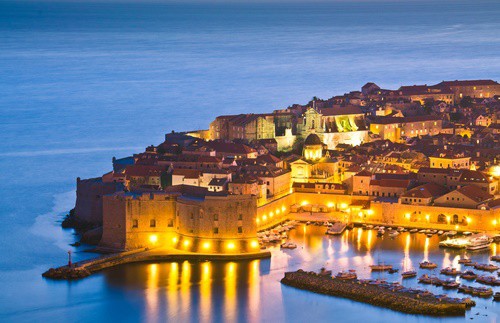 Your exciting cruise from Dubrovnik to Split begins with transfer from Dubrovnik Airport or hotel to Gruž Harbour, where your new deluxe ship awaits. Boarding is possible throughout the day, with cabins ready from 1 p.m. If you arrive early, you can stow your luggage and head out to explore the city. A meet-and-greet and welcome dinner will be hosted at 7 p.m. providing an opportunity to meet the captain, crew and your fellow passengers. 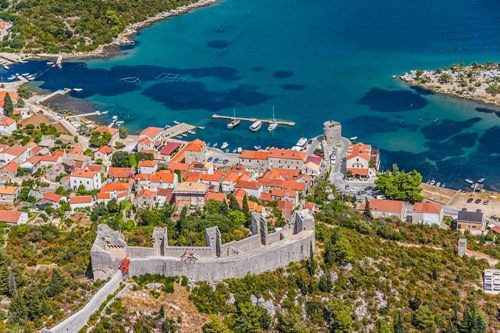 After breakfast, enjoy a guided walking tour along the cobbled streets of the historic UNESCO-listed Old Town of Dubrovnik. You’ll be mesmerized by the majestic medieval architecture of this iconic city, where you will learn all about its rich history. Return to the ship and enjoy lunch as we set sail for our next destination. Our next stop is the charming village of Slano, a peaceful traditional fishermen’s village and the entrance point to Ston, another small fortified village that is famous for its oysters. After exploring the town’s medieval ramparts and famous Ston Walls, we will take you to an oyster farm, where you will have the opportunity to sample delicious fresh oysters and mussels. 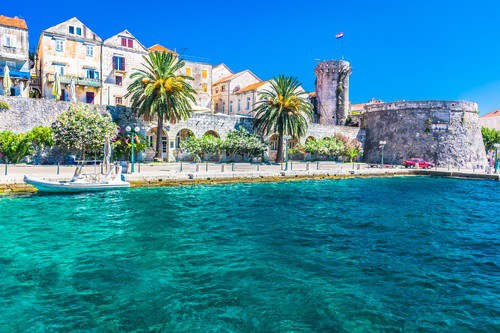 We’ll venture further north to Mljet Island and its stunning national park this morning. Walk the shores of the two salt lakes at its center and then visit tiny St. Mary Isle which sits in Great Lake and houses a 12th-century Benedictine monastery and historic church. After lunch, we journey to Korcula Island, perhaps best known as the birthplace of one of the world’s most famous explorers, Marco Polo. Your inspirational guide will take you on a tour through fortified Korcula Town. You’ll have the evening to explore on your own, sampling tasty cuisine in the local eateries. 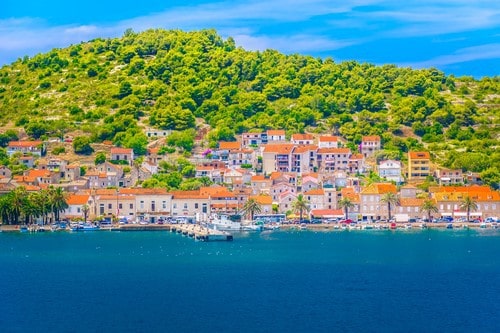 An early morning departure for the tranquil island of Vis. Enjoy a refreshing dip in the Adriatic before we arrive to this unspoiled island in the afternoon. For four decades it was closed off to visitors and abandoned by many locals while used as a Yugoslav military based. It’s managed to remain largely undeveloped, offering a step back in time with traditional architecture and pristine beaches. Look forward to exploring Vis Town at your leisure, enjoying the atmospheric vibe as you walk the lovely stone streets lined with fabulous taverns. 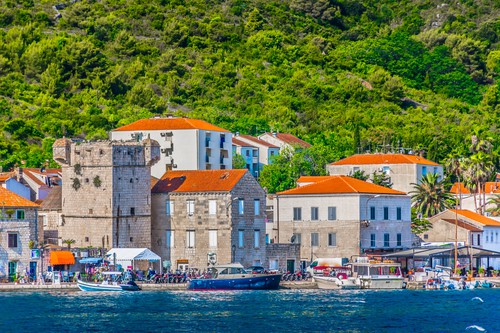 Weather-permitting, our first stop today is the Blue Cave on Bisevo Island, one of Croatia’s most famous attractions. When conditions are right, we can experience the incredible natural phenomenon that occurs when sunlight streams through, illuminating the cave with an ethereal blue glow. Our next stop is the beautiful sunshine island of Hvar. On arrival, enjoy a wine tasting tour at a very sought after family winery in Jelsa, a small and charming town on the island. Visit the Spanjola Fortress on our way back to Hvar and enjoy spectacular views over Hvar and its neighboring islands. Overnight in the port. 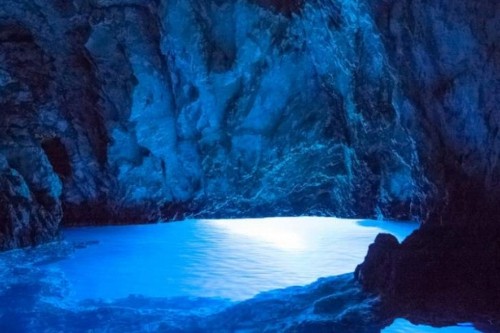 We sail towards Trogir, with a stop in Bol, famous as the home of one of Europe’s most photographed beaches, Zlatni Rat. Enjoy a swim off its shores or coffee in town before returning to the ship for lunch. We’ll continue cruising to the UNESCO-listed Trogir, an open-air museum filled with impressive medieval towers, churches, palaces and monasteries. Its Cathedral of St. Lawrence is considered one of the country’s finest examples of sacral architecture. Learn more about it on a guided walking tour, followed by time on your own. The Captain’s dinner with live music is hosted on the ship this evening. 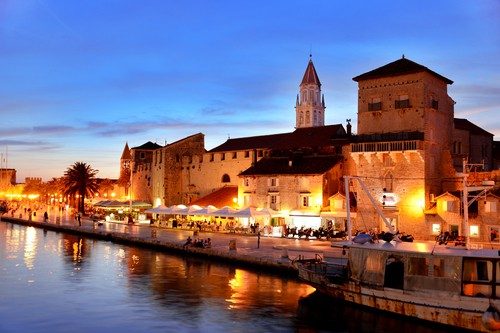 The last stop on this deluxe cruise is Croatia’s second largest city, ancient Split. You’ll have the opportunity for another swim stop before arriving in this Roman built city. Join our guide for a tour of its historical center, nearly half of which is made up of the 1,700-year-old Diocletian’s Palace, a maze-like complex with a wealth of magnificent Roman architecture. Split was built in the 4th-century as the retirement home for Roman Emperor Diocletian. After the tour, explore on your own and enjoy dinner in a myriad of restaurants and bars dotted throughout the palace. 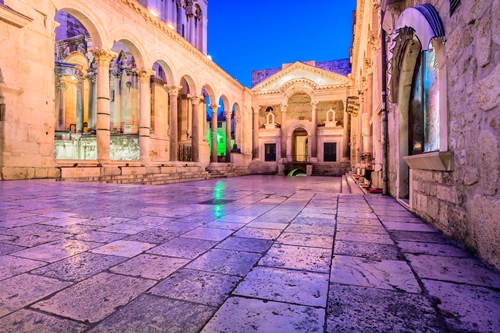 Saturday: Split Check Out (B)

While it’s not easy to say goodbye, this unforgettable cruise through Croatia ends this morning after breakfast with a 9am transfer (or earlier) to Split Airport or your hotel in Split.

Our Deluxe Croatia cruise ships are some of the most sought-after ships in Croatian waters because they are newly built to luxurious specifications with state-of-the-art tech and spacious cabins with brand new en-suite bathrooms.

Price based in double occupancy in a double or twin room. 60% single person supplement.